Minister of Foreign Affairs of The Republic of Turkey, H.E. Ahmet Davutoğlu in Greece 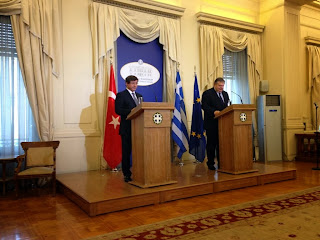 As part of his visit, Foreign Minister Davutoğlu was received by Prime Minister of Greece, Antonios Samaras and then he and his counterpart Venizelos had a tete-a-tete meeting and chaired the talks between the delegations. At the joint press conference held following the meeting, the two Ministers said that the meeting was favorable and a new page was turned in the relations of Turkey-Greece.

Pointing out that a new momentum was gained in bilateral relations with High Level Strategic Council (HLSC) Meetings, “Prime Minister of Turkey made a phone call with Prime Minister Samaras two days ago. We made the first preparations of HLSC meeting, thus we attache importance of the implemantation of this meeting after the elections in accordance with the political calendar of the two countries” said Foreign Minister Davutoğlu.

Emphasizing that there is an intensifying momentum concerning the negotiation in Cyprus in last weeks, Foreign Minister Davutoğlu said “As both guarantor countries and security elements of Turkish Cypriots and Greek Cypriots, Turkey and Greece have the political will to countibute to this process. As long as Turkey and Greece share a common perspective, I’m sure that this will pave the way for achievement of peace on island”.

Stating that Turkey considers the EU Chairmanship of Greece as an opportunity to itself, Foreign Minister Davutoğlu noted that a new term and a new frame will start which will create momentum by signing the visa exemption agreement and the readmission agreement next week in Ankara and giving such an opportunity to the EU Chairmanship of Greece on a silver plate.

Foreign Minister Davutoğlu emphasized that Turkey appreciates the steps taken recently by Prime Minister Samaras and Minister Venizelos and said “We received positive respond when we expressed our concern about unfavorable enforcements in some mosques and we have taken necessary steps reciprocally. The governments in power in both Turkey and Greece can discuss frankly all these issues”. 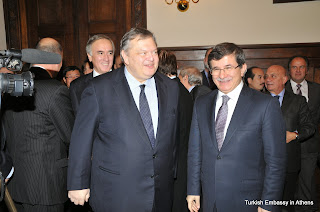