“My grandfather’s people” travel to Chania and Iraklio

Press Release
“My grandfather’s people” travel to Chania and Iraklio

Moments of reminiscence, emotion and joy is offered at the full-length film “My grandfather’s people” of the well know Turkish director, Çağan Irmak, which will be played at Chania and İraklio municipal open air cinemas.

The film’s screenings are organized by the Culture and Tourism Office of the Turkish Embassy in Athens with the support of Chania and Iraklio Municipalities, the Aegean Airlines, the Union of Hotel Owners in Chania, Kydon Hotel Chania and Capsis Astoria Hotel Iraklio.

The movie refers to the Greek-Turkish friendship and -as mentioned by its creator Çağan Irmak-, the movie “is dedicated to my grandfather, but also to all the people who had to leave their homes under the population exchange in 1923’’.

Ozan, a ten-year-old boy lives with his family in a small, beautiful city on the coastline of Turkey and learns about his ancestors through the nostalgic stories of his grandfather, Mehmet. Little Ozan’s grandfather arrived in Turkey after the population exchange and was born and raised in Crete. The grandfather Mehmet takes his grandson to a magic journey on the blue waters of the Aegean through his “bottles in the sea”. While reminiscing, the grandfather expresses his bitterness for having been made to leave his home behind but, at the same time, hopes to return again to the island someday in the future.

Some of the movie’s first filming scenes took place at the central square of the Fre village in the Municipality of Apokoronou at Chania. People wıll have the chance to meet with the director, Çağan Irmak, the producer, Mustafa Oğuz and the actors Gökçe Bahadır and Yığıt Özşener, who will also attend the movie’s screenings. 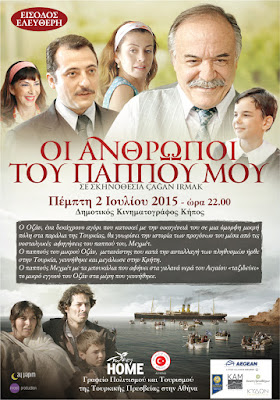 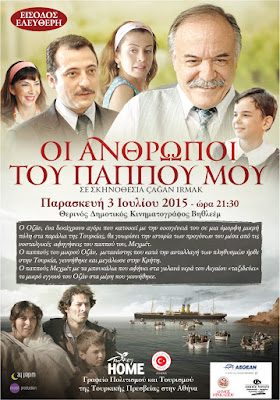