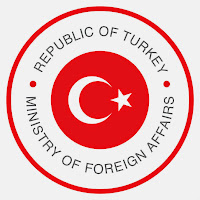 Ministry of Foreign Affairs of the Republic of Turkey has lost forty of its members as a result of attacks perpetrated by terrorist organizations, such as ASALA (Armenian Secret Army for the Liberation of Armenia), JCAG (Justice Commandos for the Armenian Genocide), ARA (Armenian Revolutionary Army) and 17 November.

Like every year, a commemoration ceremony will be held with the participation of our Ministry’s members, martyrs’ relatives, representatives of the corps diplomatic and our citizens, on Sunday, March 18, at 10:30 am at the Martyrs Cemetery of the Ministry of Foreign Affairs in Cebeci, Ankara. Moreover, within the scope of ceremonies held in İzmir on the occasion of 18 March Martyr’s Day, a ceremony will also be held by our Ministry’s Representative Office in İzmir, at the Monument for Martyred Turkish Diplomats, located in Karşıyaka, İzmir.
During the 1970s and 1980s, Turkish diplomats fulfilled faithfully their duties despite all threats, at the expense of risking their lives and their family members, never losing their loyalty to their country and strong commitment to their duties. Unfortunately, tens of innocent people were martyred only for being Turkish and representing Turkey.

The first attack targeting our diplomats and their families was perpetrated in 1973 against our Consul General in Los Angeles Mehmet Baydar and Consul Bahadır Demir. Two years after this attack, on 22 October 1975, a series of attacks linked to ASALA which were targeting our diplomats started in Vienna when Ambassador Daniş Tunalıgil was martyred.
Even though terrorism originating from ASALA, ARA and JCAG declined towards the end of the 1980s, the terrorist organization called “17 November” targeted our diplomats in Greece during the 1990s and martyred Counsellor Ömer Haluk Sipahioğlu and Press Attaché Çetin Görgü, members of our Embassy in Athens. Furthermore, more recently our Attaches have been also been martyred in Mosul and Mogadishu.

Our Ministry has been putting all the efforts to keep alive the memory of our sacred martyrs. The aim is to immortalize our martyrs also in the countries where they were martyred by building monuments and preparing plaques in their place of duty abroad. Within this framework, the preparations of the monument/plaques in memory of our martyrs have been so far completed in Sydney, Ottawa, The Hague, Lisbon and Vienna. In the period ahead, Belgrad and Burgaz will also be included in this list and we continue to work for this purpose in other cities where we had martyrs. Monuments were also built in our country in commemoration of our martyred diplomats in Fethiye, Muğla in 2015 thanks to the initiatives of the Municipality of Fethiye and in Karşıyaka, Izmir in 2008 thanks to the initiatives of the Municipality of Karşıyaka.
The locations where our martyrs were murdered are marked on a virtual map accessible from the website of our Ministry (http://www.mfa.gov.tr/sehit-edilen-diplomatlarimiz-ve-vatandaslarimiz_en.en.mfa)
Moreover, we are currently working for the preparation of a documentary movie that will cherish the holy memories of our martyrs and also for encouraging our citizens abroad to visit the places where our martyrs reached martyrdom.

On this occasion, we respectfully bow before the memories of all our sacred martyrs. May Allah bless their souls.
The list of martyred Turkish diplomats/officials and their family members and the places where they were martyred: http://www.mfa.gov.tr/sehit-edilen-diplomatlarimiz-ve-vatandaslarimiz_en.en.mfa
Tweet
zaman: 12:44