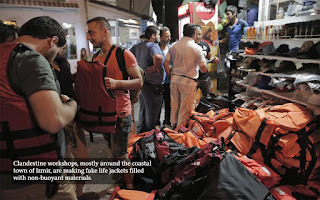 You could hear the shipwrecked passengers' cries from the beach. It was early in the morning of November 17, but still dark, when patrol boat PV 281 of the Finnish coast guard found the fiberglass immigrant boat capsized off Psalidi beach on the island of Kos in the southeastern Aegean. Survivors were clinging to the floating wreckage.

Rough weather prevented the rescue boat from approaching the sinking vessel. It meant that somebody would have to swim to offer assistance.

“I took a life jacket from a man we had already rescued. But the plastic clips which are normally used to secure it in place were missing,” a Finnish coast guard officer told the prosecutor on Kos during the ensuing probe. “I tied some knots to secure it and jumped into the sea,” he said.

Of the 17 people aboard that boat, nine drowned. Four of the victims were children. The man at the helm of the boat was a car engineer from the Syrian port city of Tartus. His lack of navigation skills was not the only reason for the tragedy.

“Two boys said that their parents had drowned because the life jackets given to them by the captain were unsafe,” the Finnish coast guard officer said, according to the case file seen by Kathimerini. “Their hand gestures suggested that the clips opened and the life jackets came off,” he said.

This is not the first case of refugees found using substandard life jackets bought in one of the towns along the Turkish coast. Several testimonies from Greek coast guard officers, EU border agency Frontex guards on the eastern Aegean islands, volunteers, as well as evidence in the hands of the Turkish authorities, indicate a roaring trade in such “life” jackets. Clandestine workshops, mostly around the coastal town of Izmir, which used to manufacture shoes and bags are now making fake life jackets filled with non-buoyant materials. When soaked, the material does not float but becomes heavy and causes the wearer to sink...more