The Turkish Embassy in Athens has the pleasure to announce the start of the Gennadius Library public lecture series, entitled “Glimpses of the Past in the Cultural Expressions of Greece and Turkey” with the first lecture on “History in Motion: Relating the Past through Cinema and Televised Serials”.

In the lecture series, popular issues regarding cultural expressions in TV, cinema, music and shadow theatres of Turkey and Greece will be presented by respected academicians in a way that will capture the interest of wider public.

Prof. Arzu Öztürkmen from Boğaziçi University, Department of History will give the lecture on “Historical Drama in Turkish Television” while Dr. Yannis Papadopoulos from University of Peloponnese and Assist. Prof. Τhanassis Agathos from National and Kapodistrian University of Athens will present their lectures entitled “Byzantium in Greek Cinema and Television”.

The Lectures are sponsored by the Turkish Embassy in Athens and the first lecture will be held at Gennadius Library, Gotsen Hall, Anapiron Polemou St. on 20 September 2016 Tuesday, at 19:00.

The poster, programme and the invitation of the lecture is presented below.

Anyone who has an interest in the subject may attend the lecture which will be held in English. 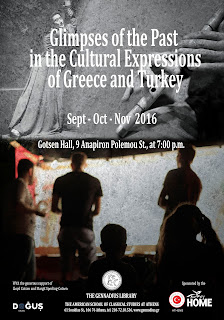 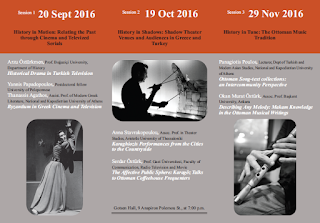