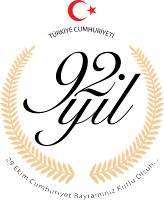 Today is the 92nd anniversary of the foundation of the Republic of Turkey, declared in the wake of our victorious National War of Independence, our last struggle for our independence and future.

I would like to congratulate the Republic Day of all our citizens living in the 81 provinces of Turkey and all across the world.
As a nation, we share the same feelings of excitement of this 92nd anniversary of the Republic of Turkey declared on 29 October 1923.
The Republic of Turkey's 92-year old history witnesses how our nation is capable to stand up again under the most difficult conditions. This gives us hope for our future, and we must heed its lessons in every step we take.
We continue our struggle to raise our young Republic rising on the ruins of a 600-year old world state to reach "above the level of contemporary civilization," an objective stated so eloquently by Dearly Beloved Atatürk, with the excitement, belief and enthusiasm of the first days of foundation.
Today, the Republic of Turkey is a source of hope for not only its own citizens but also all the victims, the oppressed, kin and brother communities in our region and around the world.
Behind the attacks to our unity, solidarity and brotherhood, lies a deep resentment from the realities reached by our Republic.
Just the way we crowned our National War of Independence initiated in 1919 under most dire conditions, with the proclamation of our new state, we will hopefully leave behind the struggles we are facing today by attaining our 2023 goals.
It is our common duty to safeguard the Republic, our nation's common edifice, and to struggle for the future of our country, the nation, making the sacrifices when needed.
Each and every one of our 78-million citizens is a child of this country and the Republic, having the same rights and sharing a common past and future, who unites at times of grief and joy.
Any one attempting to discriminate the members of our nation by their roots, beliefs, sects, culture, position or dressing betrays the spirit and essence of the Republic.
In recent years, we have acted together to craft an era in which the state and the nation stand in unity and solidarity towards grand  objectives, just as was the case 92 years ago.
In the upcoming period, we should together safeguard both this legacy and all other gains of our country.
It is my heartfelt belief that we will commemorate the centennial of our Republic having attained our 2023 goals and reached the peak of our unity, solidarity and fraternity.
With these feelings, I once again remember with compassion and gratitude all our veterans and fallen soldiers, first and foremost the father of our Republic, Ghazi Mustafa Kemal, who have made us a homeland out of this land.
Happy 29th October Republic Day!

Recep Tayyip ERDOĞAN
President of the Republic of Turkey